The ETDRS Refraction Chart R or any other visual acuity chart except ETDRS Visual Acuity Chart 1 or 2 many be used to determine the best distance lens correction, at 10 to 20 feet, for each eye. Testing of all patients, regardless of visual acuity, begins at four meters. Two ETDRS Visual Acuity Charts are used for the measurement of visual acuity, each with a different letter sequence. The right eye will always be tested with Chart 1 and the left eye with Chart 2.

ETDRS Charts will be changed as needed to maintain high contrast letters on a white background. ETDRS Charts can be cleaned with a mild soap and water.

The standard ETDRS chart light box is used at the four- and one-meter test distances. The fluorescent tubes in the ETDRS chart light box are to be 40 watt frosted cool white bulbs and are to be replaced annually each July 1. A record of the date changed and name of the individual who changed the bulb should be taped onto fixture. Room illumination should be at a level of 50 to 100 foot-candles as measured with a photometer held four feet from the floor and directed toward the ceiling. This is equivalent to the room lighting in most office buildings or schools. Illumination should be within the stated limits at all points along a line from the patient to the chart except for the three-foot segment closest to the chart, where the limit may be exceeded.

The distance from the patients eyes to the ETDRS Visual Acuity Chart should be 4.0 meters. With the lens correction obtained by subjective refraction in the trial frame, the patient is asked to read ETDRS Visual Acuity Chart 1 from the top with the right eye. It is emphasized to the patient that each answer will be scored so that adequate time should be allowed for each letter in order to achieve the best identification.

When the patient cannot read a letter, he/she is encouraged to guess if at all possible. If the patient states that a letter is one of two letters, he/she is asked to choose only one letter and, if necessary, to guess. It may be suggested that the patient fixate eccentrically or turn or shake his/her head in any manner if this improves visual acuity. If the patent employs these maneuvers, care must be taken to insure that the fellow eye remains covered. Only one reading is allowed for each letter. When a patient attempts to read the chart and comes to a level at which he/she cannot even guess, the examiner may stop the test for that eye provided that the patient has previously made some errors which indicate that the best possible acuity level has been reached.

The examiner records each letter identified correctly by the patient as he/she reads the chart. Letters read incorrectly, or for which no guessed are made, are not recorded. Each letter read correctly is scored as one point. The score for each line (including zero if no letters were read correctly on that line) and the total score for the eye must be recorded after the testing has been completed.

If the patients visual acuity is so poor that he/she cannot read the largest chart letters when tested at one meter (i.e., the number of letters read correctly at one meter is zero) then the patients ability to count fingers, detect hand motion, or have light perception should be evaluated. If the examiner is not convinced that the patient can count fingers or detect hand movements, this eye should be tested for light perception.

The same procedure for obtaining visual acuity for the right eye is used for the left eye, except that ETDRS Visual Acuity Chart 2 is used.

For purposes of statistical analyses, conversion to Log MAR units may be done. Each line of letters has a corresponding Log MAR value. It is assumed that each letter on the chart has a Log MAR value of 0.02, as each line of five letters has a total value of 0.10. One may therefore arrive at a Log MAR value for each test by the calculation (1.70 0.02 N) where N is the total number of letters read correctly. For patients tested at the four-meter test distance, 30 letters will be considered as having been read correctly prior to testing, in order to have scores attained at four meters and one meter correspond. In the example, by this method, N= (30+39) = 69 and the Log MAR value would be 1.70 (0.02 x 69) = 0.32. In other words, it is assumed, for scoring purposes, that the patient could read the 30 largest letters at one meter without actually testing this ability.

It should be noted that this method of conversion to Log MAR units has the difficulty of assigning the same 0.02 value to each letter read correctly, no matter which line the letter is from. Therefore, any letter on the 4/6.25 (20/32) line is given the same 0.02 value as any letter on the 4/8 (20/40) line, or any other line for that matter. While some accuracy may be lost by this method, the error is estimated to be small and the advantage of giving some credit for all correct answers probably outweighs this disadvantage.

Below are examples of ETDRS Visual Acuity Charts 1 and 2. 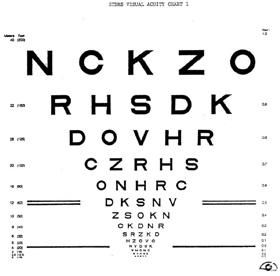 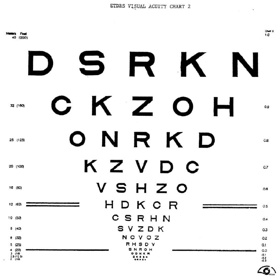 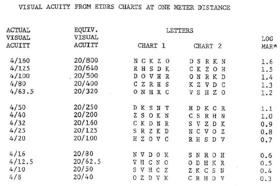 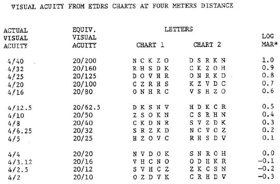 * While the source of this protocol was a study of adults aged 18 to 70 years, the Ocular Working Group notes that this protocol has reliably been used with individuals aged 5 years and older (see "General References" for study citations).

Measurement of clarity or sharpness of vision, which is the ability of the eye to see and distinguish fine details.

This assessment will provide information on rates of good to poor visual acuity in the cohort studied. The level of visual acuity is related to all ocular diseases and disorders, and is considered to be the most significant vital sign of ocular function. Visual acuity is often used to stratify respondents for more valid related comparisons, such as refractive errors (use or need for glasses or contact lens correction), which can be genetically influenced.